Printed guides are available in several languages and stewards are regularly on duty to give visitors a warm welcome and further information.

No visit to Arundel is complete without visiting the town's ancient parish church – it's a veritable "Hidden gem!" Set between the Victorian Roman Catholic cathedral and the 'Victorianised' castle lies Arundel's 14th century parish church.

There were at least two earlier churches on or near the site of the present one, of which fragments remain in the exterior walls or elsewhere in the building. The imposing church which we see today was begun around 1380, almost certainly to the designs of two of the most celebrated masons/architects of the day, Henry Yeveley and William Wynford, whose work may be seen in the naves of Canterbury and Winchester Cathedrals respectively, and in other prestigious historic buildings of the period.

Built in flint and local stone, the church consists of two separate though integral parts, a chancel and nave. The church's chancel was originally used by a small College of Canons. However, at the Reformation it was seized along with the Priory buildings by the 12th Duke of Arundel, Henry Fitzalan, and subsequently became the private property of the Earl and his descendants. Today it serves as the burial place for the Dukes of Norfolk, whose family still live in Arundel Castle, and whose ancestors mostly never forsook their Roman Catholic faith.

Over the years the fabric of the church has suffered little alteration, but, in common with the majority of church buildings, the interior arrangements have been frequently altered following religious upheavals and changes in architectural and liturgical fashion.

But St Nicholas Church still retains many features of some importance. Many of them are contemporary with the building: like the Font; the remarkable stone Pulpit; a rare medieval iron screen; Consecration Crosses; corbels; wall paintings; mason's marks and graffiti of which Arundel has a remarkable quantity; an unusually large Royal Coat of Arms; the organ which occupies part of the north transept; and the recently renovated bells in the tower. 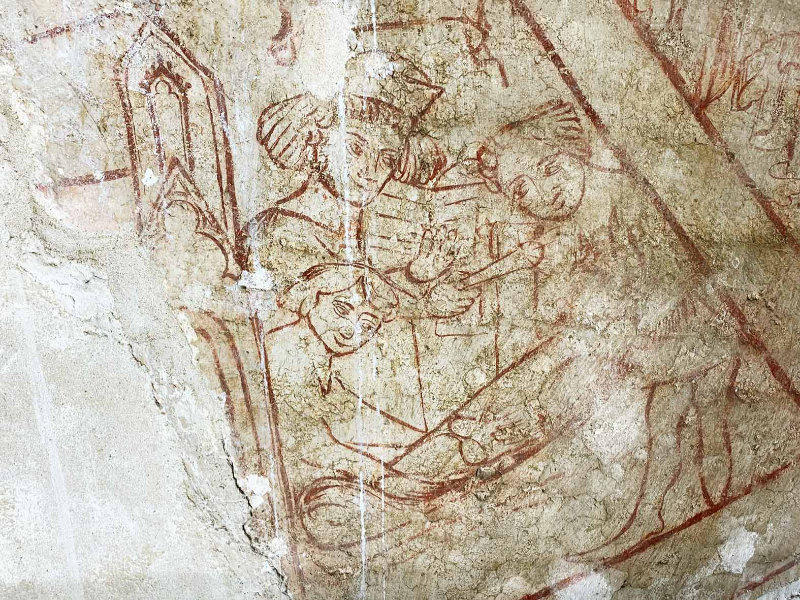 St Nicholas' church possess surviving fragments of medieval wall paintings. In this detail we see the seventh corporal act of mercy - burying the dead. The priest is pictured reading the burial rites and sprinkling a shrouded body with holy water.