It is believed that a church dedicated to St Nicholas was built on this site at about the same time as the building of the neighbouring castle (late 11th century). By the middle of the fourteenth century this church was in a state of decay, apparently through a lack of funds and de-population following the Black Death.

In 1380, Richard Fitzalan, 4th Earl of Arundel, founded a secular College of Canons, that is to say, a community of clergy to pray for the souls of the founder’s family and maintain daily worship for the people of the parish. This initiated the building of the church you see today.

What sets Arundel apart is that on 11th December 1544, just before Henry VIII ordered the abolition of the chantries, the Master of the College surrendered the College and its lands to the king. On 26th December king sold the property to the 12th Earl of Arundel for a thousand marks. This included a small chantry chapel, the chancel or quire, Lady chapel and sacristy. Therefore, this part of the church building became private property of the Dukes of Norfolk, the descendants of the Earls of Arundel, whilst the nave alone continued as Arundel's parish church.

As the effects of the Reformation took hold the church was rapidly transformed from temple to school-room—from a place of worship and encounter with the divine to a place of preaching and learning the word of God in the Bible. Altars dedicated to the saints, statues, stained glass and wall paintings were all removed, smashed or painted over, and over time row upon row of high box pews filled the church and passages from scripture were painted on the walls.

In the 19th century the Church of England rediscovered its catholic identity and a sense of the beauty of holiness once more entered our churches. In St Nicholas’ this led to the introduction of the high altar and reredos, choir stalls and stained glass windows.

A tour around the church

Click on the image below for information about each area of the church. 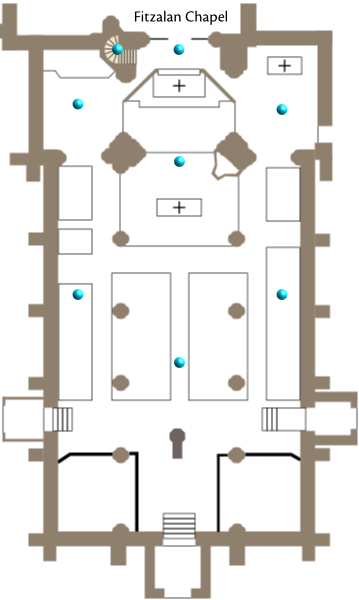