Two small areas of wall paintings are visible on the wall of the north aisle. The area above the north door, now almost completely indistinguishable, depicted the Seven Deadly Sins and Seven Corporal Works of Mercy. The second area shows the Coronation of the Virgin Mary.

Five red crosses can be seen around the church. Originally there would have been twelve which marked the places where the Bishop dedicated the church at its consecration in the 1380s.

Under each of the windows in the aisles you can see the original stone seats that were provided for the elderly and infirm. The rest of the congregation would either kneel or stand during Mass. At the sound of a bell they would look up from their private prayers to gaze with devotion upon the host (consecrated bread) held up by the priest. After the Agnus Dei (Lamb of God) they would approach the chancel arch, which delimited the sacred realm of the clergy from the secular realm of the people, to receive the Body of Christ.

With a few gaps, in part due to the effects of the Black Death, the list goes back to 1324.

Made by Robinson of High Holborn (1875). Note the carving of animals and birds. 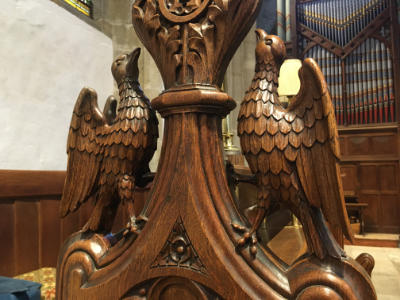 Moving from left to right, the first window in the north aisle is sadly hidden by a room erected in the 1980s. Made by the firm Heaton, Butler & Bayne in about 1864 it depicts the Adoration of Magi, Jesus & Doctors and 'Suffer Little Children'. 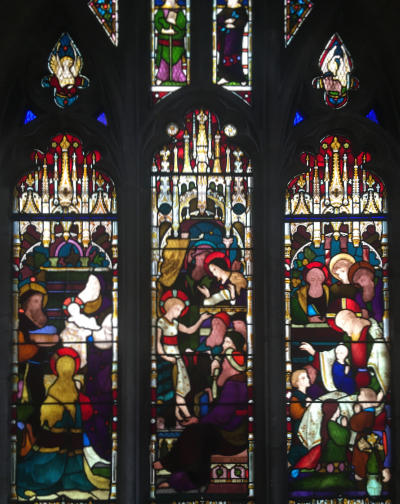 The next window depicts three of the great Old Testament Kings of Israel. In the centre is King David, holding his famed harp. To the left is his son, King Solomon, holding what is presumed to be the Jerusalem Temple built by him. On the right is King Hezekiah, known for his righteousness and religious zeal. The window was made by Alex Gibbs in 1881 and erected in memory of George Constable (died 1878), the owner of the Swallow Brewery in Arundel. 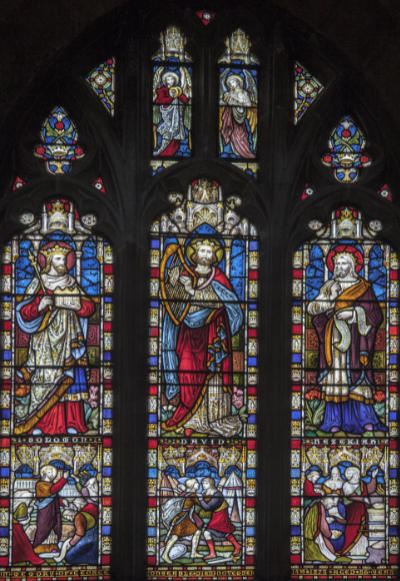 The next window depicts a swallow (Arundel's emblem). It was commissioned in 1827 by Richard Holmes, Mayor of Arundel, and made by Thomas Willement FSA. It was positioned close to the pews reserved for the Arundel Corporation. 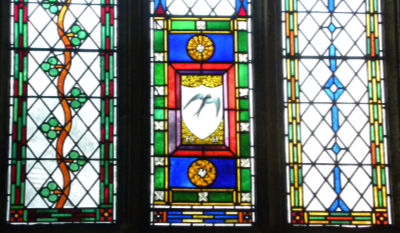 The next window depicts three more great figures from Israel's history. In the centre is Moses, characteristically holding a tablet of stone. On the right is his brother, Aaron, wearing his priestly apparel. On the left is Joshua, who led the people of Israel into the Promised Land. It was made by Gibbs & Co in 1878. 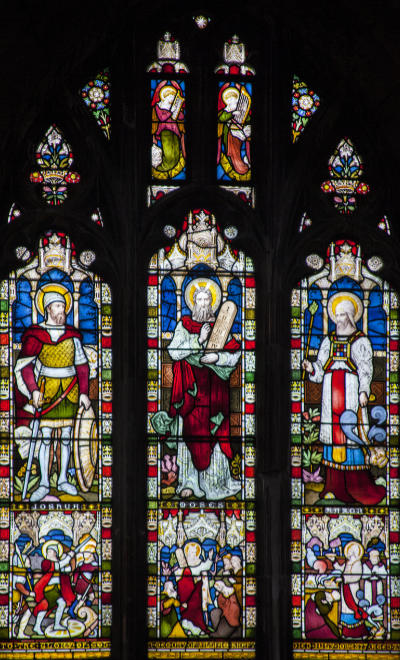