Fonts are traditionally placed near the door of a church as they symbolise the entry of a person into the Church, the body of Christ. The font in St Nicholas’ is made of Sussex marble and is probably original to the church. The base and cover are later.

Designed by Mel House (2009) in memory of Jasmine Nash.

Located high in the nave are the corbels. Corbels support the roof beams. It has been suggested that the corbels below may represent King Edward III, who reigned from 1327 to 1369, and his wife, Queen Philippa. They are siruated on either side of the west window.

The great West Window, depicting Christ the Good Shepherd in the central pane with scenes from the life of the Church on either side, was made by Mayer & Co, Munich, in 1875. Interestingly, the figure of the priest conducting the baptism is a likeness of Revd George Hart, in whose memory it was installed, who was vicar of Arundel from 1844 to 1873. 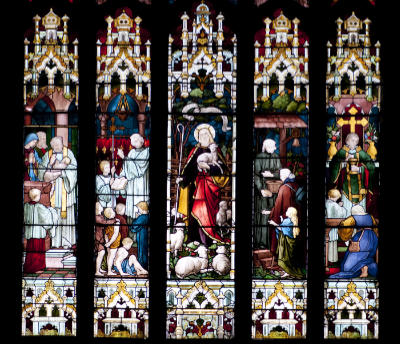